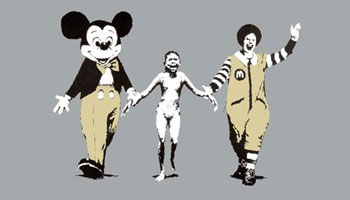 From the 5th January – 6th February 2018, those visiting Auckland city will get the chance to view a major retrospective of one of the most important artists to emerge in the latter part of the 20th century at the Aotea Centre.

Banksy is a graffiti artist and social activist who, over the years, has pulled many stunts on the art establishment around the world. He has always preferred to keep his public profile anonymous and works at high speed, using a stencil technique which has become his signature style.

The works to be exhibited include one his most famous pieces of street art – ‘Laugh now’ – which features a picture of a monkey with a sign around his neck’; “Laugh now, but one day we’ll be in charge”.

What is interesting is the assumption Banksy is a man; ‘he’ could well be, but who knows?

Due to ‘his’ fame and notoriety, global collectors began to snap up ‘his’ works for their own private collections (the irony will not be lost in terms of art history). This exhibition could be the only time the public has the opportunity to view so many works (over 80) from such a controversial and thought provoking figure in the contemporary art scene.